Day 2 ended up being as leisurely a day as one can imagine. We only had one portage to the western portion of Larus, which would position us for the following day’s travel south into Simeon and eventually Dunstan Lake. We slept in, ate a relaxed breakfast, and slowly packed up for the day. Our paddling was extremely laid back that day, with little urgency to cover ground quickly. We cruised past the fly-in lodge situated on the lake’s south end, realizing that this would potentially be the last piece of civilization we’d see for the remainder of the trip. Two bald eagles were spotted on our paddle east, and we stopped for several hours at our only portage (a 100m section of rock around a nice set of falls) for fishing and a delicious shore lunch of walleye and smallmouth.

Our eventual campsite for that day wasn’t anything spectacular: A flat, rocky point covered in scrub, where the western end of Larus bottlenecks before it turns south into Simeon Lake. We’d initially thought about pushing on further that day, but Harlan had suggested leaving ourselves a full day to tackle a potentially bone-dry, late-season Simeon Creek. The site did gain a fair amount of charm towards dusk, though. The setting sun hit the unfamiliar Boreal treeline and provided us with a picturesque reminder of how out of our usual portaging element we really were. Being late August, we were relieved that the bugs weren’t an issue to contend with. The back of our site was surrounded by a flooded, marshy section of forest that would’ve definitely been a nightmare to camp beside earlier on in the season. Southern Ontario had such an unbelievably awful year for black flies and mosquitoes so it was an absolute joy to be in the woods at sundown and not be bathed in Deet or hiding in a bug shelter. I’d made my first attempt at dehydrating backcountry burritos in preparation for the trip, and gave them a trial run that night for dinner. My only regret was not bringing more than three night’s worth, and they’ve been a staple on each canoe trip I’ve been on since then. We stayed up fairly late, as there wasn’t much ground to cover the following day, and our unimpeded view of the stars was putting on quite a show.

It was our second night in the park; we weren’t quite in the full rhythm of a lengthy canoe trip yet, but starting to settle into the daily routine of it all. 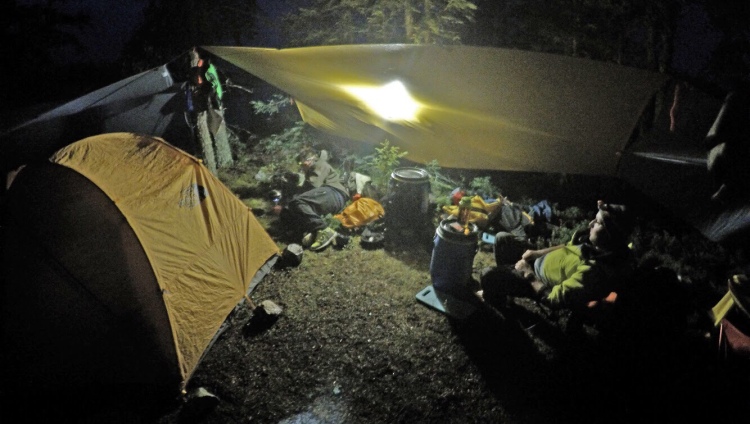 Day 3 would offer us some of our first wildlife encounters in Woodland Caribou. As breakfast was being prepared, Fulton spotted the head of a black bear swimming just around the corner of our site, with its wake across the channel visible to all of us. We thought the breakfast bacon smelled delicious, and apparently the bear agreed and wanted to investigate. We remained cautious of the fact that we were definitely being watched from behind our site, but we finished our breakfast and packed up camp without any real concern. The bear, no doubt, was waiting for us to leave so it could have a look around for anything we’d leave behind. We were still fairly close to a fly-in lodge, so the bears in the area were definitely acclimatized to humans and their connection to food. We pushed off from the site without incident, and saw no evidence of the bear as we looked back. We rounded a point on Simeon later that morning to see a large group of turkey vultures gathered on shore. Just as we realized that a large, beached carcass had brought them together to feed, we spotted a Golden Eagle perched in a branch hanging over the water in front of us. These massive birds can have a wingspan of over six feet, and we paddled almost right underneath it before it flew off to reposition itself in another tree. Golden Eagles aren’t typically scavengers, so it was possibly the commotion of the vultures that spiked its curiosity. Regardless, this was a truly rare sighting, and absolutely one of the biggest highlights of our trip.

We were warned of low water levels along Simeon Creek (“miserable” was the descriptor Harlan used), so we were apprehensive upon drawing nearer to the creek entrance. The creek, however, appeared to be extremely high as we entered the winding rocky maze, and while looking down into the water as we paddled, we could see what a nightmare this would’ve been to navigate through in low water. The first several kilometres would have been a torturous push through jagged, column-like rocks with only enough room to stick (and break) a leg in between. The rock walls that lined portions of this section provided an intimate, twisting landscape that was really fun to paddle through. We repeatedly praised the mighty beaver that dammed up this section of the creek as we easily moved through it….not considering what the eventual consequences could be, depending on where said dam would be located further on. We lucked out, though. Even though the water levels dipped a bit after we pulled over the eventual dam, there was still more than enough water to paddle. I don’t think we had to get out of the canoe more than a half-dozen times to carry over rocky sections of the creek. Drizzle had started to come down on us by this point, so we put on our rain gear and pushed through to Dunstan Lake – our destination for the day. We chose a beautiful island campsite halfway down the lake, but it rained fairly hard for our first few hours at camp and we didn’t really have an opportunity to settle in and enjoy our surroundings. We set up the tarps quickly, and strategized as to how we’d get a change of dry clothes on, make dinner, and somehow set up our shelters while keeping them dry. The rain let up after we ate and I decided to have a few casts in the dark, in a small channel between our island and another one situated about 30 yards away. Night fishing for walleye can be excellent, and sure enough there must have been a school clustered on some rocks at the channel bottom. I landed four 16-18 inch (perfect eating size) fish in almost as many casts before they smartened up to my spoon. Steve and his Minnow Trap were unable to join us for the trip, but we’d been having success with artificial lures up to that point. I only kept the last one to eat, but unfortunately found parasites in the fish while cleaning it and had to give it back to the lake. A snapping turtle ate well that night. It’s amazing how some dry clothes and full stomachs can instantly change the mood around camp; we were all in good spirits as the night wore on. The other guys eventually began to retreat to their tents and hammocks for the night, but I couldn’t be bothered to dig my tent out of my pack at such a late hour, so I just set up my pad and sleeping bag under the tarp for the night.

Day 4 began on another lazy note, simply due to the fact that we hadn’t really gotten a chance in the previous night’s rain to enjoy what a great site we’d chosen. The long island provided just enough cover for tents and hammocks, with the majority of it being exceptionally flat rock. Most of our gear was still pretty drenched from the previous day’s rain, so we took advantage of the clear skies and spread out our belongings around the site to dry. We only had a 750m & 150m portage ahead of us that day, so we weren’t in a rush to get moving. We all went swimming, fished, and lounged around camp. This was one of the aspects of the trip that I was really beginning to enjoy; we had days where we needed to travel further than others, but we were in the park long enough that we never really needed to kill ourselves (only distance-wise, as we’d later discover) on any particular day.

We didn’t pack up until well after noon, with the goal of hitting Wanda Lake that day. This would be where we’d spend our only rest day of the trip, and we were excited to see why the lake had come so highly recommended by everyone we’d talked to.

The paddle to Wanda was fairly uneventful, with the portages not posing any issues, and only a bit of shallower creek travel in the last stretch before it opened up into our rest-day destination. Wanda is a really gorgeous lake. I have soft spot for bodies of water with islands, so I might be somewhat biased, but the late afternoon sun beaming on the dead calm, glassy surface of the lake had me in awe. We began to comb the shores in search of a site, and settled on what is definitely a well-used camp. The modifications made to it (wooden stairs, etc) led us to believe that this is probably a popular site for fly-in guests, with Wanda having a stellar reputation for walleye and pike. The terrain of the site offered a large group clearing, many tent pads, an excellent fire pit, and paths to both a swimming area and a boat put-in. I’d slept so well the previous night that I decided on the tarp-only option again, and would do so for multiple nights throughout the rest of the trip. There was a noticeable glow on the horizon to the North as the evening wore on, and Nick was able to capture some impressive GoPro footage of the Borealis display – both of our nights on Wanda. We were up fairly late that first night, with no concern for anything in the day ahead except fishing, swimming and relaxation.

Exploring Ontario's lakes and rivers via canoe. View all posts by Matt Olsen

Error: Twitter did not respond. Please wait a few minutes and refresh this page.

"To be whole. To be complete. Wildness reminds us what it means to be human, what we are connected to rather than what we are separate from."
"Going into the woods is going home."
A few of the guys made it out last weekend for an easy ice out trip. It was touted as a primer to what is looking to be a great season of paddling. The weather was a typical mixed bag of beautiful April weather….sun, rain, snow, wind and thunderstorms. The guys didn’t let the weather hinder them getting out for a troll. Tom bravely managed his inaugural first swim of the season, as well as gathering more then enough wood to hunker around the fire to share food, stories, and trip plans for the upcoming season.
Happy Earth Day folks.
How you know paddling season has started.
Come on spring! Let’s go!
Loading Comments...
%d bloggers like this: