I have made fire!

In my early days of outdoors adventuring, I used to take a lot of time trying to light fires with newspaper, or dry leaves, and although fires eventually always got going, some required more cursing and frustration than I would have cared to admit. In my last year of high school, a course on outdoor education was offered, and I gladly took it. It was in this class that I learned a bunch of fire starting techniques that were both cheap and pretty easy to put together. From a simple blob of hand sanitizer, to cotton and vaseline, and steel wool and a battery, I gained all kinds of knowledge on how to get a nice fire going. It was years later that this recipe came back to me after seeing a National park selling fire starters for $2 a pop. I will show you how to make a version of that fire starter for next to nothing with items most people have laying around at home or in the garbage anyway.

Materials you will need
empty egg carton (the bottom half)
dryer lint
wood chips, or sawdust or shavings (optional)
old candle
knife
empty tin can
pot
newspaper
Step 1.
Set up your newspaper (so the melted wax doesn’t ruin whatever surface you are working on) and place your fire starter materials on top of it. 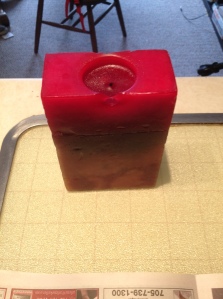 Step 2.
Fill the egg cartons cups with dryer lint. I decided that with these fire starters I would use some Aspen wood shavings as well, that I had on hand, to increase the longevity of the flame that will be produced. It is not completely necessary, but trying new things is a great way to find the best way possible to make things work. As you can see in the picture, The cups are filled with a nice mix of dryer lint mostly on the bottom and the aspen on the top.

Step 3.
The wax melting process goes much quicker, the smaller the pieces of wax are that you are using. I took and old candle, any old candle will do, and shaved pieces of it off into my waiting tin can. It doesn’t matter what candle you use, even the good smelling ones are nice. The one I used this time is cherries and cinnamon. Place a small amount of water in the bottom of a pot, a cup or two should do. If you use too much water, your can will float and tip over once the water starts boiling, unless you weigh it down. Bring the water to a boil, and place your can in it. After a few minutes the wax should begin to melt, with all but the largest pieces only taking five minutes or so.

Step 4.
Using an oven mitt, remove the tin can from the boiling pot and begin to pour your melted wax into the individual egg cups. Ensuring to coat as much of the lint and shavings as possible. It will seep down and begin to soak into the egg carton. You don’t want the entire egg carton covered in wax, as you will need a place to light it once you’re ready to make your fire. Your wax level should come just below the highest point your lint or shavings reach. You may need to repeat step 3 a couple times until you get the right amount of wax for all your fire starters.

Step 5.
Now you can walk away, take the dog for a walk, have a beer, or just shine up that paddle. All you need to do now is wait for the wax to cool and harden. This process can be done a lot faster if you want to stick them in the freezer.
Step 6.
Now using a knife, or tearing if you would rather, separate each carton cup away from the others, until they are all detached.

Congratulations! You just made some awesome fire starters, that may even smell great. Depending on your materials, and how much wax was used, these little guys can burn big and bright from 10-25 minutes. Perfect for getting even the most stubborn of fires roaring in no time. When I take mine out on a trip, they are packed in a large Ziploc bag, and placed in a dry sac, with waterproof matches, and a lighter. I call it my Fire bag.